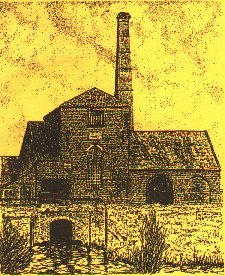 Until the 17th century Fenland was mostly a vast marshy swamp with some islands of higher ground - such as the Isle of Ely. In 1630 the Earl of Bedford employed the Dutch engineer Vermuyden to drain the southern Fenland in order to create land for agriculture. The drained soil then exposed to the air was mostly composed of peat which began to shrink and waste, and the ground level fell. Over the years it became necessary to pump rainwater from the fields up into the rivers which had remained at the pre-drainage levels.

At first, windmills driving large scoop wheels were used which pushed and lifted up the low-lying water. As land levels shrank further and further even the windmills could not deal with the height of lift required (in places the fen is now some 6 metres below river level). Fortunately the invention of the powerful steam engine arrived in the nick of time. The Old Engine at Stretham was one of over one hundred steam pumping engines installed throughout the Fens and which replaced some 800 windmills in the 1800's. In times of heavy rains and danger of floods, farmers were reassured to see smoke belching from its tall brick chimney and so to know that the Old Engine was at work in its slow but effective fashion, lifting the waters.

The Old Engine was installed in 1831 and laboured successfully until 1925, and was used as a stand-by until 1941. It was then superseded by a more convenient and efficient diesel engine connected to a centrifugal pump. In 1945 the diesel engine was itself superseded by another pumping station, now electrically powered, located some one and a half miles to the southeast on the bank of the River Cam.

It is not practical now to operate the Old Engine by steam, so an electrical drive has been installed to enable the manner of its former operation to be demonstrated on the days when the Engine is open to the public.

Displays about the history and development of land drainage and its machinery are shown in the Engine Room.